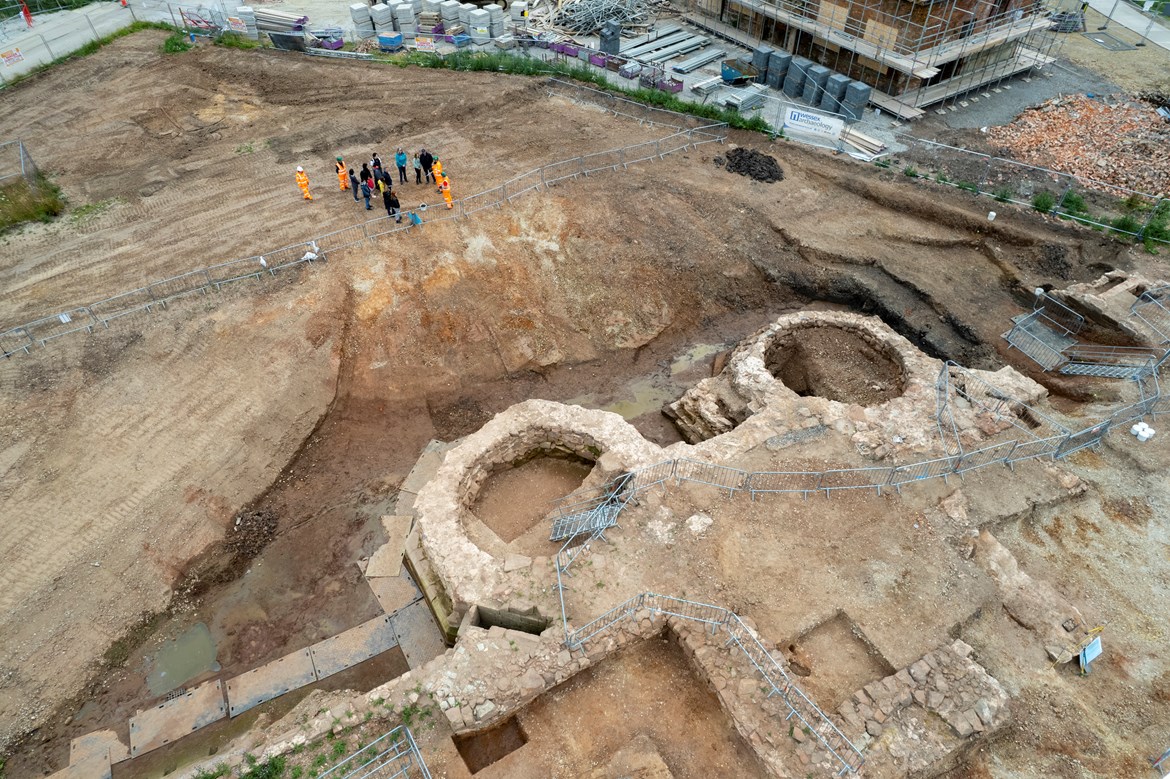 As part of this year’s Festival of Archaeology, the public are being invited to hear about the incredible archaeological excavation of a 16th century manor and gardens in Coleshill Warwickshire. Previously unknown, Coleshill Manor has been uncovered by HS2 archaeologists working on Britain’s new high-speed railway.

HS2 revealed the discovery of the impressive manor house, and expansive gardens in early 2021. During preliminary investigations, the existence of the gardens and manor house were picked up by air photography and from that HS2’s archaeological team began preparing for the specialist excavations. Wessex Archaeology, working on behalf of HS2’s enabling works contractor LM JV, have been carefully excavating the site now for over two years.

The impressive garden has been compared to those found at Kenilworth Castle and Hampton Court Palace. Spanning 300metres end to end, archaeologists have uncovered well-preserved gravel paths, garden pavilion foundations, geometrically organised ornaments and planting beds. Recently, the team have been excavating an incredible medieval gatehouse which sat at the entrance to the manor house inside the medieval moat.

The existence of a gatehouse at the site was referred to in a 17th century will, but it was only when excavations took place that the existence of the gatehouse was confirmed.  Not only was the gatehouse a defensive feature for the manor, it is likely it was also a status symbol. Built using fine ashlar masonry, well-carved stone blocks, the gatehouse is a square stone building measuring about 10m by 10 m with two angular towers. The gatehouse is thought to have been built around the late 14th century before being pulled down in the 17th or 18th century.

“HS2 has given us an unprecedented opportunity to discover, excavate and study incredible archaeological site all the way from the West Midlands to London. Our investigation at Coleshill Manor gives us a fascinating insight into the history of this site and we are pleased to be able to share it with the local community.”

The team at Wessex Archaeology have also uncover more details of the history of the site which they are sharing with the local community.

“The excavation of this impressive site is one of the most thorough investigations that have ever taken place on a medieval manorial site. The gatehouse is part of a much wider landscape that has been subject to very painstaking archaeological investigation and this adds to its importance, as we can better understand what other buildings and activities the gatehouse was once associated with.

“We’re pleased to be able to continue to share this with the local community, through a series of open days, drop-in sessions and webinars as, after all, it is everyone’s shared history.”

The local community have been invited to hear more from the archaeologists working on the project at a drop in event at Coleshill Town Hall on Tuesday 19th July, one of a series of events HS2 are holding during the festival of archaeology.