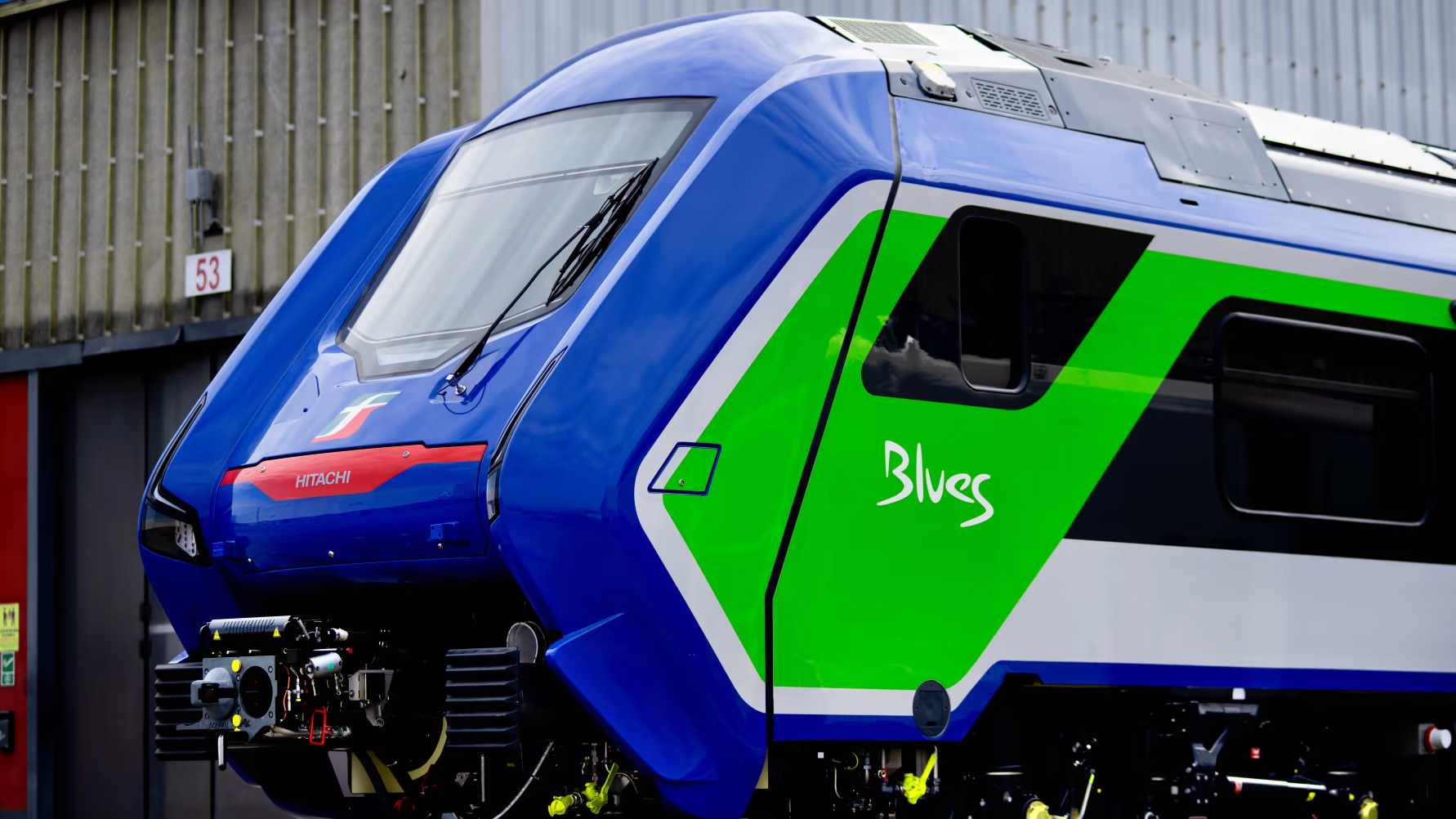 Hitachi Rail’s new ‘Blues Train’, one of the most advanced trains in the world, was unveiled today (Wednesday 21st 2022) in Berlin at the world’s largest rail transport fair, InnoTrans. Built for Trenitalia, the cutting-edge battery hybrid train will reduce carbon emissions and fuel consumption by 50% and has the ability to arrive at and depart from stations completely under battery power. The train will be the first ever ‘tri-mode’ (using battery, electric and diesel power) fleet to enter passenger service in Europe, later this year.

The train’s inauguration comes ahead of its introduction into passenger service in Italy later this year where it will offer more seamless, sustainable travel for passengers. The train is derived from Hitachi’s Masaccio platform. The total Blues framework agreement with Trenitalia includes the supply of up to 135 trains worth €1.2bn.

The ‘tri-mode’ Blues train, represents a significant breakthrough in the market, with its ability to operate seamlessly on electrified and non-electrified lines. On electrified routes, it uses pantographs to draw power from the overhead lines. However, when it moves to non-electrified lines, usually smaller regional routes, a combination of battery and diesel power takes over. When it is near a station, the batteries power the train completely, eliminating emissions including harmful NOx and reducing noise pollution. The battery is able to recharge while the train is in operation, both in diesel and electric mode.

The fleet’s top speed is 160km/h. Yet, crucially the extra power offered by the on-board batteries means the Blues train’s acceleration and performance is superior to existing diesel trains, allowing it to offer reduced journey times for passengers.

The Blues train is equipped with innovative European Rail Traffic Management System (ERTMS) digital signalling, which has up until now only been used on high speed trains. This system supports the reduction of the railway’s energy and emissions footprint by regulating the speed, acceleration and braking of trains. ERTMS also boosts safety by enabling the automatic activation of train safety functions, including emergency braking in case of danger or if trains exceed the track’s line speed. ERTMS is recognised as the European rail standard, making the Blues Train highly interoperable and suitable for operation across Europe.

“The Blues train, with its pioneering battery hybrid technology, is a hugely important way for railways across Europe to reduce their carbon emissions, while improving passengers’ journeys.

“We’re thrilled to unveil this technology here in Berlin and to begin passenger service in Italy later this year. We know that decarbonising transport is a vital mission around Europe, so we’re delighted to provide our customer with effective solutions that lessen the impact on the planet.”

Hitachi Rail is committed to becoming a climate change innovator and is already a global leader in battery train technology. Six years ago, Hitachi Rail introduced the DENCHA train, the world’s first battery-powered passenger train. It is also progressing a battery hybrid intercity train trial in the UK.

The new four-carriage trains have been manufactured at Hitachi Rail’s factories in Pistoia and Naples, can reach 160 km/h of maximum speed and accommodate up to 300 people seated. The fleet has been designed to accommodate families and leisure travellers, as well as regular commuters, with features including greater capacity for luggage and bikes, air conditioning, more USB and power sockets for greater connectivity, and an area entirely dedicated to children. The fleet has been designed with platform level door access to increase the ease of entry and departure for wheelchair users or passengers with buggies or large bags. It also boasts the latest in passenger information screens (24 inches), passenger counting technology and excellent access for people with limited mobility.